A Short Story about Professor Irvin Roth and Russell

Irvin Roth, a Jewish Professor at Foothill Junior College, picked him up and asked two questions:

After hearing “NO” to the first two questions, Professor Roth asked a third question, “Would you like to join the fire service?”

Aimlessly going through life with no job, no place to call home and, absolutely no hope or thoughts of a career, the young man quickly answered, “Yes”. He simply figured that the fire service was better than nothing.

Dr. Roth immediately changed his route and took that young man back to the Foothill College campus, where he taught, and stopped at the Los Altos Fire Station. There, the young man was instructed to fill out an application to become a Student Firefighter. The pay rate was $27/Month, plus housing. The young man had never been in a fire station in his life and had never known a firefighter. This miraculous change of events was as overwhelming to him as it was unexpected.

Now is the best time to join the National Recruit Database. Also, you will obtain valuable tips and other resources to help you on your way to becoming a successful recruit.

In closing,  we at Firefighter’s ABCs wish you the absolute best in your pursuit of a career within the Fire or EMS field. 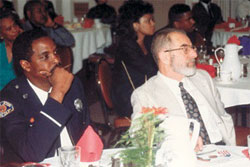